Today I had a bad experience. Since I’m OK now, I guess I can call it a good experience. But let’s start from the beginning.

I got up at the motel I was staying in. It wasn’t such a good motel, although it was supposed to be better than the ones I stayed in so far. Anyway, the deal included breakfast but turned out to be a load of stuff that I don’t eat (I’m really trying to watch my weight here.) I just got half a cup of orange juice and went on my way to Bryce Canyon National Park. I arrived after a short, 200 km, drive. To continue reading you’re going to need to use this picture: 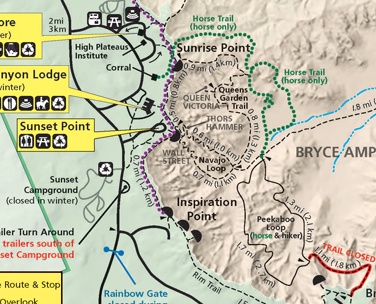 Learning from my experience with Canyonlands Park I went straight to the visitor center for advice. I requested a 3 to 4 hour hike and the ranger there told me that I can do the rim walk from Sunset Point to Sunrise Point then continue to Queens Garden and then do the Navajo Loop. He also said that this wouldn’t take as long as I requested and that normally he would recommend Peekaboo Loop, which is an additional 5 km, but because snow covers the trail it would be hard to follow (he also mentioned 2 women that tried it 2 days ago and had a rough time.) Here’s lesson number 1: when a ranger tells you something like that he basically means “you’re going to lose the trail and die.” I didn’t pick up on that so I told him I might try Peekaboo Loop and if I see that I can’t find my way I’ll just head back the same way I came in. He said “OK” or something similar which, in ranger jargon, means “crap, we’re going to have to get that guy out. I’ll call home and tell the wife I’m going to be late.”

So I went on the trail, which was amazing (see pictures below.) Since it snowed, I couldn’t see the trail but it was easy to follow the footsteps of the people that walked it before (this is basically what everyone does.) Then I got to the point where I needed to decide whether I’m heading up to the starting point or trying Peekaboo Loop. I felt like I wanted more, so I went on the Peekaboo Loop trail. At that point the sun was shining and I was sweating lightly under my coat and gloves. It felt nice and warm.

Walking in the snow isn’t easy. At many points the snow was knee deep and at some my entire leg was submerged in it. When you’re going downhill it’s not that bad but when you go uphill that’s an entirely different story. Considering that the elevation was about 2.5 km, I was struggling for oxygen and my heart was pounding like I was doing a tough aerobic workout at times.

There were tracks that showed me the way on Peekaboo Loop. After a while you kind of pick up how the trail goes even if there are no footsteps. So in some points where I lost the track I was able to find it a little after. The trails in Bryce Canyon go between rocks and loop around them so you can’t see the trail far ahead. But then, after walking quite a long way (I’m guessing around 3 km), I lost the trail completely. I thought I was going the right way because, just like before, I found some tracks to follow. I noticed they weren’t human tracks and they looked like horse tracks (I could see the hooves markings in the snow at some points.) I followed them for a while and then they split into 5 different tracks to 5 different directions. I tried to go in the direction that seemed reasonable but it led me to a place where I couldn’t walk anymore.

I was exhausted. I felt that by now I should have arrived at the beginning of the loop and started my way back up. I even decided to give up my male pride and was willing to ask for directions. I’m just kidding – there was no one there to ask. The parking lot had one other car when I arrived at the beginning of the trail and no one else tried Peekaboo Loop. I knew I was going to pay a heavy price going back the same way I came in but I had no choice – I had no idea where I was. But then… I couldn’t find my own track going back because of the other tracks in the snow. Here’s lesson number 2: when you try to track back your footsteps remember that you’re creating more footsteps tracks that may confuse you later (as they did me.)

And that’s when I panicked.

I honestly thought this was it. There was no one around and I couldn’t see a way back up – the rocks block the view so even if the trail to go back out is right in front of you, you can’t really know that. Also – that same warm sweat from earlier started freezing my body. Lesson number 3: the sun will only warm you while you’re in sight. When you go down the canyon and the rocks block the sun it’s going to get cold, especially if you’re standing in one place trying to decide what to do. I considered my options and initially came up with two: calling for help and shouting for help. I tried calling 911 but there was no signal, not even for emergency calls. Before I started shouting I had another idea – I’ll use my GPS device to tell me what my coordinates are and then see how far I am from the visitor center, which was saved on the device. At least this way I can get a general direction. So there’s lesson number 4: if you have a GPS device, you should save the locations which you know are on the trail (like the beginning of the trail and maybe places where there is a sign or a bench.)

But then I found my own tracks. Already exhausted, both physically and mentally, I started my way back. By the time I got to the car I was stumbling on almost every step. I was cold, out of breath (I had to go all the way back up the canyon, a few hundred meters above where I was) and hungry. Lesson number 5: take food, snacks, anything. Not just water (which I had), even for a short hike.

I drove to the first store I could find (right outside the park), ate 6 granola bars and drank disgusting Starbucks Mocha, trying to get carbs into my bloodstream. I started feeling better and drove to Zion National Park, not before I changed to a clean, dry and non-freezing pair of socks. I got to the best motel I’ve stayed in so far – Canyon Ranch Motel. The managers, Karen and Mark, are extremely nice – I told them that I started feeling sick so they gave me all kinds of natural medicine and I feel much better now. Also, the room I got is the best I’ve had on this trip (I was in 4 other motels on the way.) They wouldn’t accept payment for their help. I think I should send them something when I’m back in Israel.

Zion National park is huge. I’ll just do one easy hike (don’t worry, I’ve learned quite a bit from today’s experience). I found out that the north rim of The Grand Canyon is closed and the roads to the south rim are snowpacked and icy in places (I’ll make sure tomorrow with the Zion park rangers) so this means I might try to go all the way to Las Vegas tomorrow. I’m not happy about it because I didn’t plan my stay in Las Vegas yet. We’ll see.

And finally,here are today’s pictures:

Best Of This Blog